Hope Lutheran is a member church of the English District of the Lutheran Church Missouri Synod and boldly confesses the truths of Holy Scripture as they are correctly explained in the Ecumenical Creeds and the Lutheran Confessions.

We approach God with humility and repentance and receive from him the greatest gift we can imagine, forgiveness and life through our Lord Jesus Christ.

We who have been washed clean in Holy Baptism gather weekly as a family to receive these blessings.

We have a place for you in the vineyard

We welcome everyone to join us in person on Sundays for our Bible Study at 9:00am and Divine Service at 10:00am. View Church Calendar

For more about our Church, please read the online Beliefs and Practices Brochure 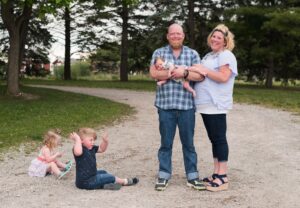 Reverend Ray Hulett was born in Long Beach, CA in 1983, so he is technically a native Californian. However, just before his first birthday, his parents moved to the Philippines as missionaries with Grace Brethren International Missions, and he spent 13 of the next 17 years there, returning to Los Angeles in 2001 to attend the University of Southern California. He graduated from USC in 2005 with a BA in English. Prior to attending Concordia Theological Seminary-Fort Wayne, IN in 2017, he worked for 12 years at a telecommunications company. The path to seminary and the Office of the Holy Ministry started in 2008 when he did a random Google search. That search led to a Lutheran website, then internet radio shows and podcasts, and finally to St. Paul’s Lutheran Church in Long Beach where he was confirmed on All Saints’ Day, 2009. Two years later he met Aubrey (a born and raised California girl from Orange County) who was also catechized and confirmed at St. Paul’s shortly before they married in July of 2012. It was not long before she began encouraging her husband to consider the ministry, but Rev. Hulett embraced it only after his younger brother, Ryan, passed away from leukemia in 2015, and a new appreciation for Christ’s promise of resurrection was kindled. Rev. Hulett and Aubrey were joined by Arthur in 2016, just eight months before leaving for the seminary; Ruth followed in 2019, just before their vicarage at Messiah Lutheran Church in Danville, CA; and Albert arrived a week before Call Night in 2021. Ray and Aubrey also have six children who preceded Arthur but were taken to Jesus from the womb where they wait with them for the Resurrection. Ray and Aubrey are very excited to have been called back to California, to serve the saints of Hope and the people of Fremont with the good news of our Savior, Jesus Christ, and to making a home in the Bay Area and becoming part of their new community.

For Those With Interest In Our Church

If you have questions about our congregation, its teachings, or wish to become a member of the congregation please use this Contact Form.

Logia, A Journal of Lutheran Theology

Gottesdienst, The Journal of Lutheran Liturgy